The Vuse Digital Vapor Cigarette in its original flavor is a wonderfully fantastic and exquisite little device. within the black box it comes in is a pamphlet on one side advertising the product’s features. On the other side of the box is the Vuse Digital Vapor Cigarette itself this e-cigarette comes in a rectangular plastic see-through case that resembles very much so the kind of rectangular plastic cases new ipods come in these days. When you open up the case you see directions on how to use the product on the inside flap. It shows you how to properly replace the Vuse cartridge when it runs out by a click on method. It also tells of how long the battery lasts which is one day, and what indicates the battery needing to be charged.

On the other side of this instructional flap is the actual Vuse Digital Vapor Cigarette itself, the charging unit and another pamphlet advertising the features of the product. 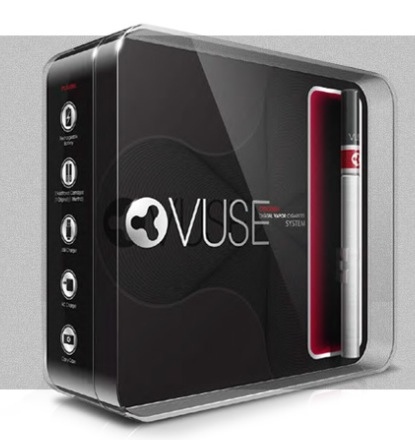 The Digital Cigarette itself is a very sleek and attractive looking device. The cartridge on top is black with the produce’s symbol neatly advertised on it in red and silver with Vuse in silver reading above the red banner. The tube part of the Digital cigarette is a nice looking silver color.

Inside the pamphlet it boasts of this product as being “the first electronic cigarette that finally delivers” and that its the “first truly Digital Vapor Cigarette, powered by smart technology for a perfect puff, first time, every time.” When you fold the pamphlet open more it reveals a drawing of the Digital Vapor Cigarette and all of its important external and internal components such as the smart light indicator located on the end that lights when you take a puff and tells you when the cartridge or the battery is running low, the power unit that ensures the longest time between recharging, the Quick Connect device that lets you easily connect cartridges by a simple click on method, the Smart Memory device that knows how many puffs remain in each cartridge and when its depleted, and the V-Liguid device that contains the special ingredients of vegetable glycerin, “highest quality” nicotine extracted from the tobacco plant, and other flavor additives. On the back of the pamphlet are directions for how to charge the Digital Cigarette. on the back of the see through plastic casing it tells that “each cartridge lasts about as long as a pack”, that “the light glows white when you inhale”, and that “replacement cartridges sold separately in a variety of flavors.” Vuse Digital Vapor Cigarette is a product of the RJ Reynolds tobacco company located in Winston-Salem, NC. RJ Reynolds has made such famous real cigarettes such as Newports and Camels.

This is a very unique and special device. It has a very sleek and stylistic look to it. Thats the first thing Inoticed when I took it out of the packaging. it has a smooth silver tube and a black and red cartridge at the top. Its much more stylistic and attractive looking than any other electronic cigarette I have ever seen. The device is simple and easy to use, just like any other Electronic Cigarette. On my first drag i noticed immediately a significant difference in the taste and quality of the product. When I took the first drag it felt more like what an actual cigarette is like when you smoke one. I was very fond of this discovery. Also, I noticed that I didn’t have to smoke it as frequently as other electonic cigarettes because the nicotine level was significantly higher than other electronic cigarettes i’ve tried, faithful to Vuse’s advertisement on the Nicotine factor. When i took my drags the end of the tube glowed an attractive white colored which I found to be much more favorable than other electronic cigarette colors which typically glow blue or orange. Overall, I am very impressed with the Vuse Digital Vapor Cigarette and its my favorite Electonic Cigarette to date. My only problem with it is that its currently only available for retail in Colorado, making getting a replacement Cartridge impossible. I would highly recommend this to any fans of electronic cigarettes and to an extent people trying to lean off using real Cigarettes who are trying to quit. Those people trying to quit smoking however, should be wary to know that the Vuse Digital Vapor Cigarette contains a higher dose of nicotine than regular electronic cigarettes. Overall very satisfied with this product. Only con is the imited sale market which will improve once people realize how good this product is,

Gadgets:: The Other might be better then the “Other”

I’ve tossed around several ways to approach my review of the Microsoft Surface 2 tablet but it’s impossible to make an iPad comparison since I’ve owned several over the past few years.

After coming to grips with the conclusion that I really liked the Surface 2, I was upfront on a recent conference call with Microsoft representatives, telling them that I was really enjoyed using the Surface 2 and many features it has vs. the “other.”

Supporting Flash is an obvious and never-ending difference but the most significant feature in my mind, which the Surface 2 has and the other doesn’t, is the little memory slot tucked away under the built-in stand.

Using the microSD memory slot with cards up to 64GB (not included) enables the Surface 2 to have  memory expansion for storing movies, music, documents or whatever you want. This is in addition to internal memory of 32 or 64GB.

But the positives don’t end there. I really like the tablet’s construction of built-in dual-position kickstand, keyboard and cover.

On the side is a mini display and USB 3.0 ports and comes with the full Microsoft Office 2013 suite of programs.

It runs Windows 8, which allows you to sync it with eight other Windows 8 machines.

Each Surface 2 comes with a free 2-year account to the Skydrive Cloud network. Skydrive is a cross platform Cloud storage solution, which will work with any version of Windows in a browser.

One thing I did notice was that the Surface didn’t come with much documentation, which isn’t really needed. The first time you turn it on the step-by-step instructions are as easy as can be to get you up and running.

A nice feature lets you have multiple accounts without having to turn the tablet on and off. Each user can have their own setup of apps and appearance; just log in and out for each user.

When you set up a children’s account, restrictions can be put in place to limit what can or can’t be done. A weekly report can be emailed to the administrator informing them what the children’s site has been doing.

I do wish the charging cable was something a little more mainstream but I’m sure there are some internal reasons for that.

There is also a 3.5 megapixel front facing-camera (great for Skype, etc.) and a rear 5 megapixel camera.

I can’t say I’m now a regular Windows users but the Surface 2 sure does have a place in my tablet world.

The Karma can be in the palm of your hand for instant WiFi most anywhere.

Data is $14 per GB and it allows up to eight devices to be connected simultaneously without sharing your data. Once someone connects to your Karma and they sign up for data, you will receive 100MB of data deposited into your account.

Karma coverage is in 80 major U.S. cities and a 2014 nationwide coverage expansion will add more than 230 cities using the Sprint 4G LTE Network.

The Outdoor Tech Buckshot wireless (Bluetooth) speaker is designed for cyclists, but can be used in most any environment with its rugged, water-resistant design.

The speaker is built with a rubberized outer shell enabling it to be shock-resistant and withstand small drops.

It comes along with a universal mount for bicycle handlebars for riding along with the music or using it as a hands-free device for phone calls since it has a built-in microphone.

A full USB charge will give you about 10 hours of use and its IPX-5 water-resistance rating enables it to withstand splashes of liquid.

The Armorz Stealth Extreme Lite screen protectors are as strong as any I’ve seen.

It’s pretty amazing how clean your screen stays on top of the great protection, which is advertised to be able to withstand impact from a hammer or drill.

While I won’t put that part to test, I will say fingerprints are at a minimum with the 0.2mm think tempered glass.

Officially it has an 8H hardness rating, which means nothing to me specifically except to say it prevents my iPhone 5s LCD from getting scratched up. 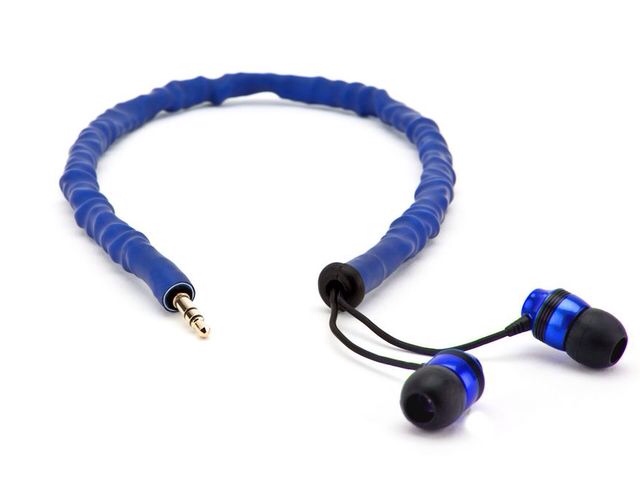 When I was first handed a pair of the Cord Crunchers, I didn’t know how to respond. I sort of blinked at them blankly, startled by the sheer fact that I’d gotten a pair of headphones none of my friends had ever seen before, and that they worked. They were neon green, and stretchy, though being the cautious person I am I was hesitant at first to pull the very thin cords from the elastic case.

One of my favorite features was the fact that I didn’t have to worry about tangled headphones, something I’d struggled with previous to having a Cord Cruncher in my possession. You could very smoothly pull the headphones from the elastic cover and pull them back in (after getting used to doing so) and all your friends would be in awe at your crazy awesome skills with hidden cords (well, that’s how it felt to me at least). Another great feature was that you could wrap your Cord Crunchers around your wrist and suddenly they became a neon bracelet. There was no more shuffling through your backpack or searching your room endlessly for headphones, because there they were, conveniently on your wrist. People would see the Cord Crunchers on my wrist and would gasp and gawk, saying “whoa, are those headphones or is that a bracelet?” and would contemplate it for a whole three seconds until I told them how the Cord Crunchers were both. That’s overdramatic of course, but you get my point.

I also was a huge fan of the bass booster, and how the headphones completely were sound proof. I temporarily was in my own world while wearing them, and it was great when I was in a noisy room and was trying to work, because I could listen to my own music in peace. However, there were aspects of the Cord Crunchers I wasn’t too fond of. I was constantly afraid I would tear the cords by getting them caught on something, like a door handle or a nail.

Another thing was after a while the elastic was worn a bit, and started leaving these black lines when the headphones were in the case, which bugged me a bit yet at the same time it added character, so that wasn’t as bad (I’m one of those kids of kids, what can I say). Another problem was when I stretched the headphones to get the cords back in the case, the buds on the earphones would fly off without my knowledge and when I went to put my headphones in I was surprised to see they lacked the buds I needed. Overall, I enjoyed using the Cord Crunchers, and would definitely recommend them to friends, but would also tell them that they should take the buds off first.